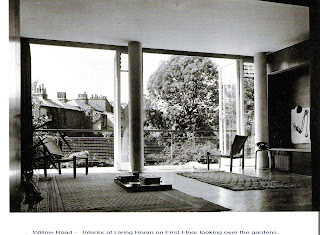 Famous as the house Goldfinger built for himself and his family in 1938 it is the central house in a terrace of three. There was a major battle with the planners and local residents to get the houses approved - they replaced a terrace of run down cottages. Sounds as though conservation was the same big issue - the finishes probably reflect this in the use of brick (unlike the other white rendered modernist houses that were going up in Hampstead by Amyas Connell, Maxwell Fry etc). The rhythm of the front elevation is particularly nice. 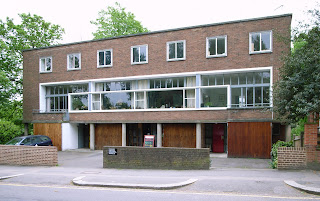 by stevecadman on Flickr
It is smaller in scale inside than I expected, but having said that, a masterpiece of spatial organisation and storage planning: circulation spaces are kept small but well lit and brightly painted - a scarlet walled stairwell another surprise - leaving the living and bedrooms well proportioned and high ceilinged. Flexibility rules on each floor with dividing folding doors and spaces leading one into another. Fascinating to see the study where Goldfinger worked with all the job files still on the shelves. 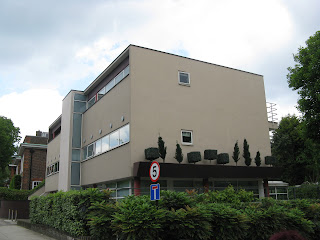 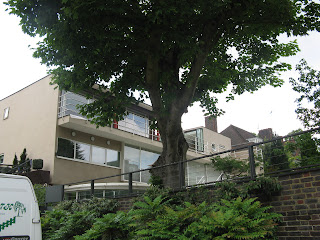 ...and the back.
Detailing everywhere is high quality - my favourite being the steel door frame and architrave that is used throughout, plus the unobtrusive but generous storage designed in everywhere. The sense of it being a family home is very strong with as much thought given to the childrens' rooms and furnishings as to the main reception rooms. Light floods in everywhere and a sense of rationality and warmth pervades...enhanced by the collections of paintings, small sculptures and found objects etc that reflect the family's life.

Unfortuately we were not allowed to take photos of the interior, nor is it possible to get into the lower level as that is now used as a flat for the N.T caretaker.

For a very entertaining insight into Goldfinger see Gillian Darley's review for Nigel Warburton's book about him in London Review of Books.

Text and all images by Leo Noble except front view of Willow Road by stevecadman on Flickr.