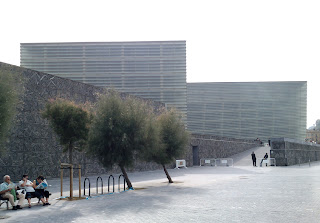 Having visit the inverted emperor's new clothes of the Bilbao Guggenheim, I finally made it to San Sebastian, and to the Kursaal Palace, by Rafael Moneo.
Whilst I have never doubted which is the better building, the Guggenheim had surprised - and impressed me - with it's sheer scale, its total bombast and swagger, but yet it remains a Frank Gehry signature building. It says little about the city of Bilbao, and the galleries themselves were quite staggering in their clumsiness. Having recently visited the Nottingham Contemporary - a masterclass in the lighting and display of art - one wonders quite how the Guggenheim managed to get it so wrong...the NC was just so clever and somehow so modest...anyway, I digress.
Except, not quite... 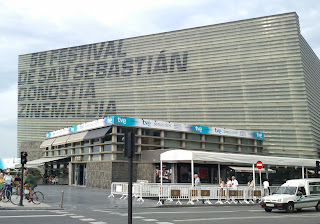 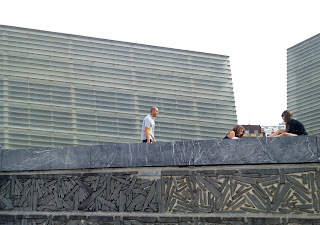 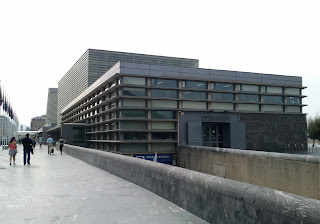 But maybe that's not it at all. Maybe the connection between the buildings is more subtle, more general. Maybe it's something to do with the extreme architectural formality which both buildings seem to possess, whilst both somehow remaining informal and - can I say - proletariat? Just look at those awnings!
Gabriel
Posted by brutalism+booze at 22:56