last one from the pre-easter saturday Camberwell session... 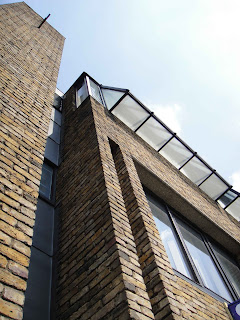 Posted by brutalism+booze at 23:03 No comments: 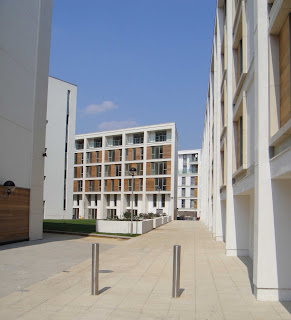 Here's an oddity.  A building which looks like a computer visualisation even after it's built.
Posted by brutalism+booze at 22:59 No comments: 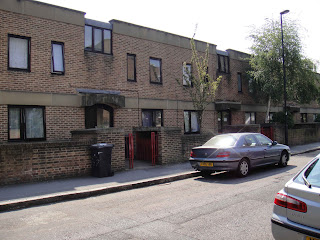 This is a very decent little terrace in brick and concrete which I also include for the slightly other-worldly quality of that Peugeot 406...
Posted by brutalism+booze at 22:48 No comments: 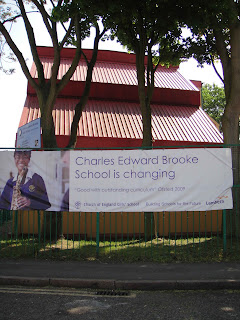 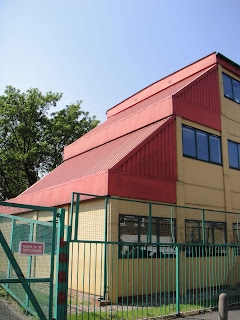 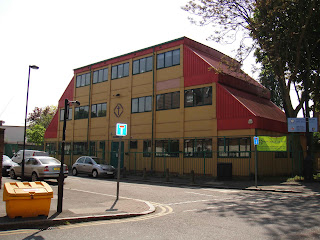 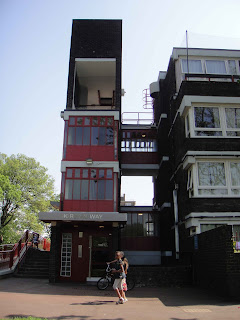 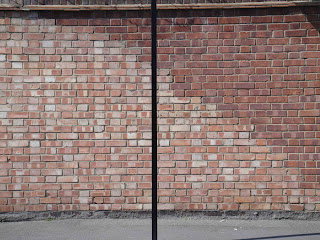 Posted by brutalism+booze at 22:21 No comments: 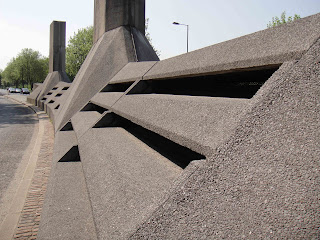 Some interesting shots of the inside here. 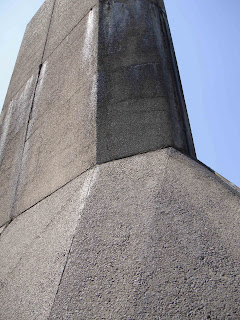 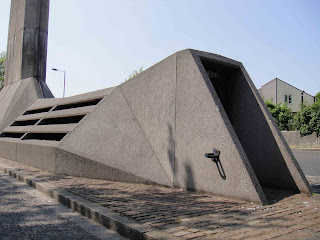 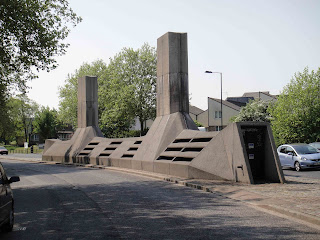 Posted by brutalism+booze at 22:16 No comments:

I was kindly lent several copies of Architectural Design recently - all from the 1960s - and spotted this article from November 1960 which relates to my previous post on the elephant house at London Zoo.
I've not yet had any real success finding out more about the Basle building, apart from that it was probably refurbished around 2008, but it would obviously be interesting to find out how they handled the task in relation to London Zoo's attitude to their own building.

Posted by brutalism+booze at 13:07 No comments: 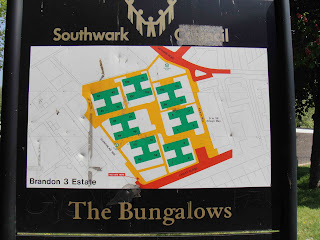 This amazing place I found completely by chance on my way to the Sterling building and I thought at first sight that the long single storey brick structures must be a nursery or health centre.

In fact, as you can see from the map above, the 7 H-blocks each consist of 4 self contained bungalows and although all the glazing has been replaced with PVC they still have an amazing modernist elegance which wouldn't look out of place in a leafy bit of Hampstead. 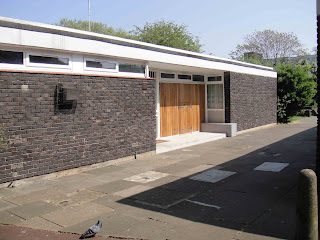 I more or less walked round the whole thing with my mouth open, marvelling at the quality of the hard landscaping and the lush planting whilst catching occassional glimpses of Bukowskian figures moving from kitchens to lounges to inner rooms beyond. 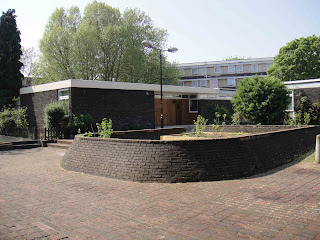 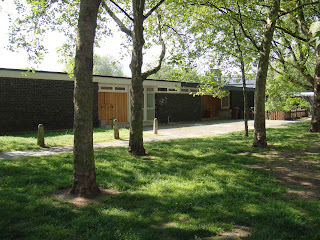 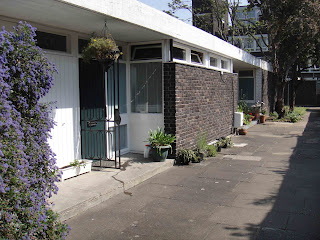 Posted by brutalism+booze at 23:37 No comments: 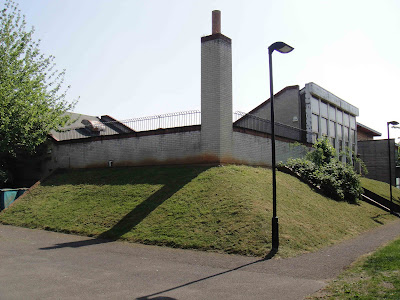 I discovered this building thanks to Edward Jones and Christopher Woodward's 'A guide to the Architecture of London' and spent a pleasant meandering morning reaching it through a cornucopia of interesting urbanity on a beautiful sunny pre-easter saturday. 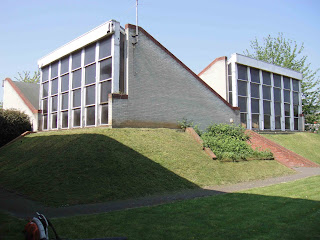 Subsequently, my interest in Stirling rekindled, I very much enjoyed a ramble through Iqbal Aalam's Flickr images and notes on Stirling's work which renewed my resolve to see more of his buildings and particularly the (obvious but essential) Leicester Engineering Faculty. 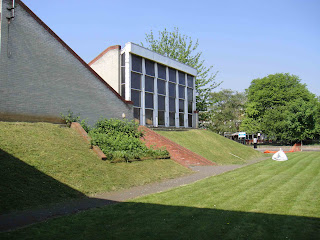 Amongst the discussion that IA's images generated was some speculation on the value of Sterling's exploration of Po-Mo with the verdict seeming to be that it was probably a wrong turn...which I wouldn't totally disagree with in the sense that in some cases (No1.Poultry for example) the classical referencing seems to have become an end in itself, but at Brunswick Park the imagery (maybe I can call it narrative imagery?) seems integral to architectural concept as a whole. 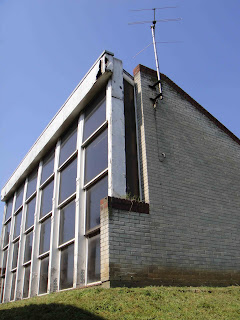 Specifically I'm thinking of the 'hill-fort' grass banks and especially the Di-Chirico-esque high corner chimney stack with its long red pot which reminds me so much of Aldo Rossi's work although possibly pre-dates it by several years? 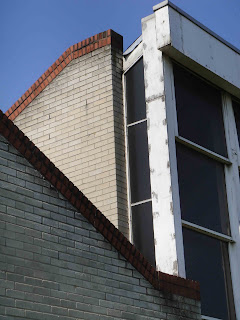 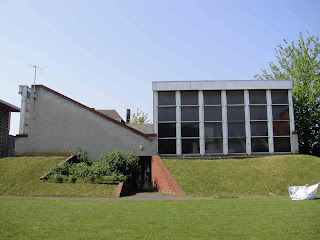 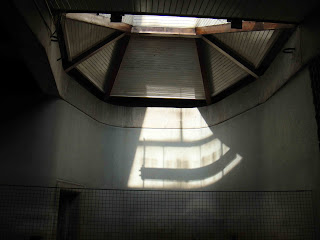 There's currently a sign outside the entrance to the building saying that the elephants and rhinos have been moved out because it no longer fits in with the current thinking on welfare (which seems to favour enclosures more imitative of the animals' natural habitats) although you'll find that it's not vacant, there being two large molty (or are they mangey?) camels inside along with a lot of bearded pigs and an armadillo. 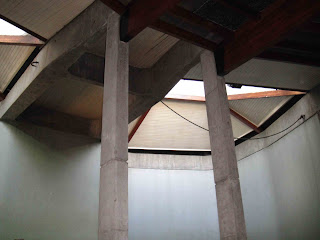 But assuming that the building wasn't actually doing the elephants any harm I think the zoo should consider standing by it - and it's original purpose - because there's something truly magical about seeing animals here (even pigs) that is unique and deserves a serious attempt at re-assimilation. 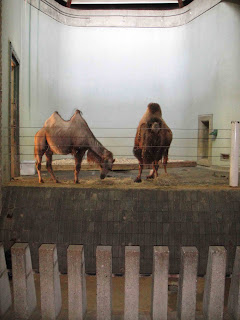 If the problem is also one of public perception (as hinted at in Keith Miller's 2002 Telegraph article.) then the solution should perhaps be more one of public information than architectural intervention (although a spruce up of the interior a la Royal Festival Hall would be a welcome show of faith). 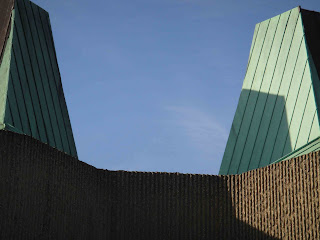 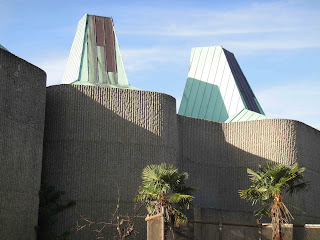 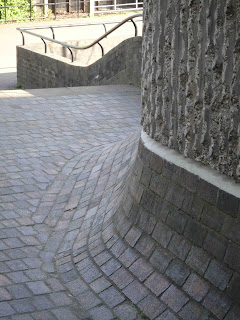 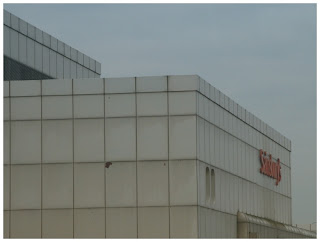 I discovered this guy's photos randomly surfing a few months ago and for some reason remembered them today and wanted to have another look at the dirty architectural fragments. Here's his Flickr page. The three links below the above pic are v.nice as are a lot in the Wandsworth Road set (which is most of what I've looked at so far).
Posted by brutalism+booze at 21:41 1 comment: