Derivative but not without Integrity 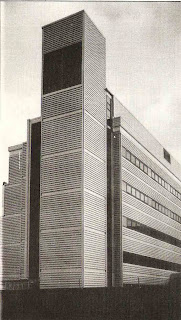 Thanks to Merlin Fulcher who gave me the reference to a review of this building in a 1982 issue of Building Design Magazine which the British Library eventually inter-loaned my local library, who let me borrow it for little more than the price of half a pint of lager although a fine of exactly £120.17p was threatened for its non return.
From this I have learned that the building was designed by the regally descended Property Services Agency to fufill various functions for the Stationary Office and that architecturally it is thought derivative of James Strirling's Florrey Building in Oxford. 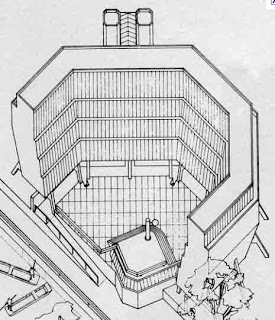 You can see this a bit in the photos of a previous post although it was clearest of all from the pre-demolition google map, which now, devestatingly, appears to have been updated to show the building...gone.

The article also throws light on the authors of the Post Office building next door (see same link), namely GMW, who've been practicing their trade since the seventies and who, in 1988-91, produced this in London's City: 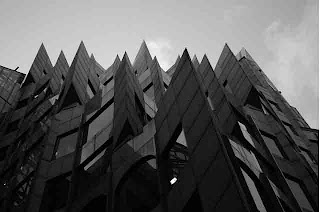 Which looks like this from another, more typical, angle: 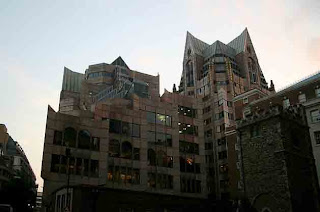 There's a commentary on it here and a few words on it on Skyscrapernews.com which both contain reference to Gothic Post-Modernism which is interesting because, as 'isms' go, GPMism is quite a rare beastie.  I'd nominate William Whitfield's Bessborough Street as a kind of fine-art version of the same animal but would note that Po-Mo seems generally to stand for the combining of a kind of Classisim with a kind of Modernism - an exemplar of this perhaps being the Marco Polo building opposite Battersea Park...which I read somewhere recently may itself have an appointment with the wrecking ball...
Posted by brutalism+booze at 23:40